Blyth Arena
The 1960 Winter Olympics (officially known as the VIII Olympic Winter Games and also known as Squaw Valley 1960) were an international winter multi-sport event held between February 18 and 29, 1960 in Squaw Valley, California. The organizing committee made the surprise choice to award Squaw Valley with the 1960 Winter Games at the 50th IOC meeting on April 4, 1956. However, the community was mostly undeveloped at the time of the selection, so all venues and infrastructure had to be built or improved at a cost of $80 million before the Games.

The 1960 Winter Games featured the first athlete's village, and was designed to be intimate, allowing spectators and athletes the ability to walk to nearly all of the venues. The opening and closing ceremonies were produced by Walt Disney Productions and televised by CBS. The 1960 Games were the first to have television broadcast rights sold to the highest bidder. It also marked the first time in 28 years that the Olympic Games were held in North America. 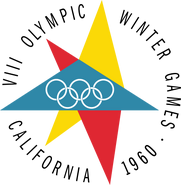