Zhao Jiawen
The 2022 Winter Olympics officially known as the XXIV Olympic Winter Games (届冬季奥林匹克运动会, Dì Èrshísì Jiè Dōngjì Àolínpǐkè Yùndònghuì) was a major international sports event that was held from 5 - 20 February 2022 in Beijing, China. Beijing was announced the host city at the 128th IOC Session in Kuala Lumpur, Malaysia, on 31 July 2015.[1]It was the third consecutive Olympic Games held in East Asia, after Pyeongchang 2018 and Tokyo 2020. Having previously hosted the 2008 Summer Olympics, Beijing became the first city ever to host both the Summer and the Winter Olympic Games. It also became the largest city ever to host the Winter Olympics, a distinction previously held by Vancouver which hosted the 2010 Winter Olympics.

The 2022 Winter Olympics was be the first Winter Olympic Games ever to be held in China. The estimated budget for the Games was $3.9 billion, less than one-tenth of the $43 billion spent on the 2008 Summer Olympics.[2] Beijing was also the fourth city in East Asia to host the Winter Games, after Sapporo, Japan (1972), Nagano, Japan (1998), and Pyeongchang, South Korea (2018). North Korea was likely to be banned after not attending Tokyo 2020 due to "health concerns". Haiti and Saudi Arabia competed for the first time at the Winter Olympic Games.

The bidding calendar was announced by the IOC in October 2012, with the application deadline set for 14 November 2013.

The IOC Executive Board reviewed the bids from all applicant cities on 7 July 2014, and selected Oslo (Norway), Almaty (Kazakhstan) and Beijing (China) as the final candidate cities. Oslo withdrew its bid on 1 October 2014, leaving Almaty and Beijing as the two remaining candidates.

Beijing was selected as host city of the 2022 Winter Olympics after beating Almaty by 4 votes on 31 July 2015 at the 128th IOC Session in Kuala Lumpur, Malaysia.

The Beijing Olympic Games Bidding Committee unveiled the venue plan for the 2022 Winter Olympic Games on 20 February 2014: five ice events will be held at the Olympic Sports Centre, the Capital Indoor Stadium and the Beijing Wukesong Sports Center, which were some of the main venues of the 2008 Summer Olympics. Competitions for luge, bobsleigh and alpine skiing will be held in Xiaohaituo Mountain area in Yanqing northwest of Beijing, 90km away from the city center, using artificial snow because of the rarity of natural snow in this region.[3][4] All other skiing events will be held in Taizicheng Area in Chongli, Zhangjiakou, 220 km from downtown Beijing and 130 km away from Xiaohaituo Mountain Area.[5] Later, on 12 June 2017, the IOC´s Beijing 2022 Coordination Commission has praised the city plans to hold the Snowboarding Big Air events in a new area of urban development located in the Shijingshan District.[6]

The town of Chongli in Hebei Province will stage most of the skiing events during the 2022 Winter Olympics. The ski resort earned over 1.54 billion yuan (237.77 million U.S. dollars) in tourism during the 2015–16 snow season for a 31.6% growth over the previous season. In 2016, it was announced that Chongli received 2.185 million tourists, an increase of 30% from the previous season, during the first snow season after the winning the Olympic bid. The snow season lasted for five months from November, during which Chongli has hosted 36 competitions and activities, such as Far East Cup and Children Skiing International Festival. A total of 23 skiing camps have also been set up, attracting the participation of 3,800 youths. All venue construction started in November 2016 and will be finished by the end of 2020 to enable the city to hold test events.[7]

The Beijing Subway is expected to continue expanding and projected to have at least 24 lines by 2022. Expressway and highway networks are also expected to be upgraded.

A new second airport for Beijing and the region, tentatively known as Beijing Daxing International Airport, is expected to open by 2019.

The 2022 Winter Olympics are tentatively scheduled to include events in at least 15 sports. The sports pictograms were unveiled on 31 December 2020 to celebrate the new year in preparation to the Olympic Games. 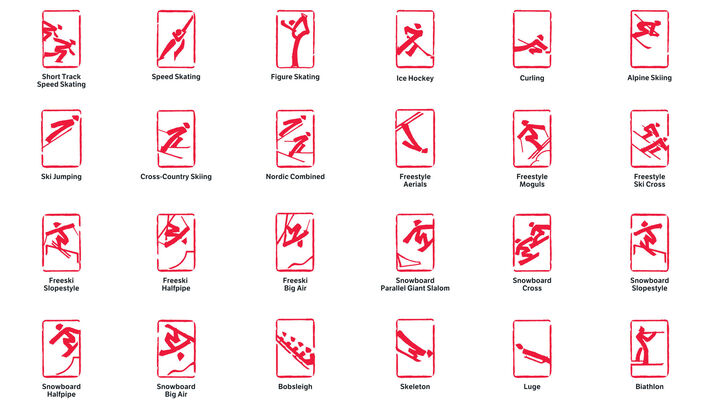 In October 2016, the International Ski Federation (FIS) announced plans to begin sanctioning women's competitions in nordic combined, with a goal for the discipline to be contested at the Olympic level for the first time in Beijing.[8]

In November 2017, a further three events were put forward by the FIS for possible Olympic inclusion: a Ski Jumping mixed team competition and men's and women's big air in freestyle skiing.[9]

Twenty-nine nations won at least one medal, with Norway topping the medal table for the second time in a row. With 16 gold medals, the nation won the highest number of gold medals by any nation at the Winter Olympic Games, and with 37 total medals, the nation also equalled the old record of the United States from 2010. New Zealand won its first gold medal ever at the Winter Olympic Games, while Belgium won its first gold medal since 1948 and second-ever gold medal.

In 109 events, only one event was dominated by a single nation: all medals in the men's two in bobsleigh were swept by Germany, following their podium sweep in the Nordic Combined event in 2018.

25 out of 37 Norwegian medals were won in men's events, with only 12 being won in women's events. In events for men, Norway won 10 gold medals, considerably more than Austria with 5, and Germany, China, and Sweden with 4. The Netherlands topped the medal standings for the women's events, having won 6 gold medals, followed by Germany and Norway with 5, and the United States, Sweden, and Switzerland with 4. Eleven potential gold medals in mixed events were won by nine different countries, while Germany dominated the open events, winning four out of six available medals.

Ireen Wust became the first athlete ever to win a gold medal in five (consecutive) editions of the Olympic Games, but was not able to equal the record fifteen medals by Marit Bjoergen yet. Arianna Fontana became the most decorated athlete in Olympic short track, while Joergen Graabak became the first athlete in Nordic Combined to win four Olympic gold medals, and while Natalie Geisenberger won her sixth Olympic gold medal in luge. Gu Ailing Eileen was the first freestyle skier ever to win three medals at a single edition of the Olympic Games.