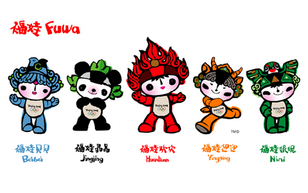 The Fuwa (Chinese: 福娃; pinyin: Fúwá; literally "good-luck dolls", also known as "Friendlies"), were the mascots of the 2008 Summer Olympics in Beijing. The designs were created by Han Meilin, a famous Chinese artist. [1] The designs were publicly announced by the National Society of Chinese Classic Literature Studies on 11 November 2005 at an event marking the 1000th day before the opening of the Games.

There are five Fuwa: Beibei, Jingjing, Huanhuan, Yingying, and Nini. Together, the names form the sentence "北京欢迎你", or "Beijing huanying ni," which means "Beijing welcomes you" in Chinese. Originally named 'The Friendlies', they were promoted as 'Fuwa' when there were concerns the name could be misinterpreted. [2]

While originally given artistic license in his commission, Han Meilin was subsequently requested by officials to include various Chinese designs and fauna in the Fuwa. Han Meilin drew 1,000 models of possible Fuwa (including a dragon and an anthropomorphic drum) before settling on the five characters. He has since disowned the Fuwa and did not include them in his museum. [3]

TV series: A 100-episode Olympic-themed cartoon series featuring the Fuwa was released in China, primarily on BTV (Beijing's municipal television network), on 8 August 2007. Titled The Olympic Adventures of Fuwa (Chinese: 福娃奥运漫游记), it was jointly produced by BTV and Kaku Cartoon. Two other series were also produced to promote the Olympics.

Video game: The Fuwa made an appearance in the video game Mario and Sonic at the Olympic Games. China Environmental Awareness Programme: The China Environmental Awareness Programme program, started in 2001, has the Fuwa raising public environmental awareness by spreading clean, green messages. Fuwa theater show: A large-scale fairy-tale drama entitled Friendlies (or Fuwa) has been directed by to Beijing Children's Art Theater Cooperative to promote the five mascots of the 2008 Beijing Olympics. As ambassadors of peace, the Fuwa will make a world-tour, visiting all seven continents.

Wuwa: In the months leading up to the Olympics, coincidental similarities between the characters and several events became were noted on internet blogs under titles such as "Curse of the Fuwa". Some Chinese have taken to calling the characters "Wuwa" (witch dolls). Online criticism of the dolls has frequently been censored. Each Fuwa/Wuwa has a respective catastrophe for which it has been blamed:

Killer barracuda:The Fuwa Beibei is represented by a Chinese sturgeon. Five sturgeons were presented by China to Hong Kong with each fish representing an Olympic ring, in addition to the "motherland's love" for the Hong Kong Special Administrative Region. The smallest of the five sturgeon (1.1 meters) was bitten by one of the barracudas housed in the same aquarium, and died the day after being publicly released into the city's theme park aquarium Ocean Park. Necropsy showed that the bite was not aggressive, but a reflex action from contact between the fish. Ocean Park said no one is at fault since in the almost 10 years the eight barracudas had been with the park, they had never showed any signs of aggression. Feng shui experts were divided about the death of the sturgeon, there were some that said this event may imply misfortune, and there were some that said 'the public did not need to worry too much because all fish die' and 'Can I say it's a bad omen for the Olympic Games if, for example, my five tadpoles - which I say represent the Olympic rings - die at home?'. Beijing's central government replaced the one that died with five more sturgeons. 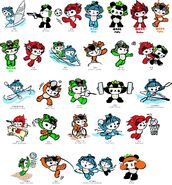 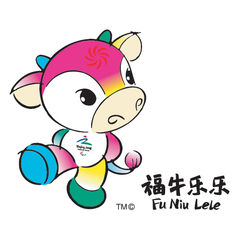 The mascot, designed by Wu Guan Ying, professor at the Academy of Arts and Design at Tsinghua University, was unveiled on on September 6, 2006 at the foot of the Great Wall of China's Badaling.

Fu Niu Lele represents a harmonious co-existence between mankind and nature, it represents athletes with a disability striving to make progress, and it represents the Beijing Paralympics Games' concept of "Transcendence, Equality and Integration."

There were originally 87 mascot designs suggestions. These were discussed by a jury on December 30, 2005, and shortlisted to three designs: a Chinese river dolphin (lipotes vexillifer), and two figures from traditional Chinese mythology, the Monkey King and Ne Zha. A revising group, lead by Wu GuanYing, looked over the three designs, and found that the dolphin and Monkey King designs could cause problems with intellectual property rights, while the Ne Zha was not suitable.

They considered looking for an alternative design, and Wu GuanYing came up with the idea of a cartoon cow. Wu GuanYing said "I grew up in the countryside and was once a cow herder, so I know that the cow is one of the animals closest to human beings. Cows are well-known for their friendliness and their affinity to the humans who care for them."

In the Official Paralympic mascot video, it becomes apparent that the mark on Fu Niu Lele's forehead is made of a dandelion seed pappus.[5]